Altair Clone: Can you tell the difference? 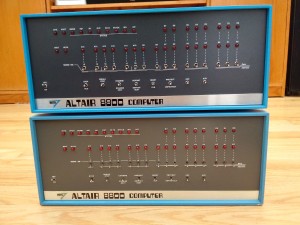 Some of the Altair’s need restoration work and I need a benchmark computer which I know is good and working.  I know it will work as designed and when I do something on the real 8800, I can do it on the Clone and make sure I get the same results.  I can use it to test the functionality of the 8800 and 8800a.  I can probably use this for the 8800b (with front faceplate switches) but definitely not the 8800bt (that have no front switches).

In addition, real Altairs are heavy, loud and, quite honestly, I don’t really want to keep them on too long 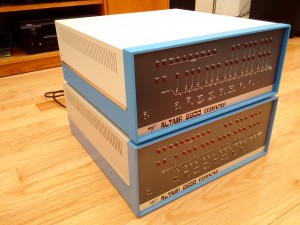 while I am restoring them.  There are also some expensive and almost unobtainable parts in them and I want to keep them in original pristine condition.

The clone is the workhorse vs the show pony.  I will definitely learn on this and try out various options.   When I first lifted it (at the post office picking it up), I was amazed and at the same time amused.  The day before I had worked on my Zeus 80 S-100 computer with integral 12″ monitor and 2 8″ Shugart drives.  That was heavy!

I was very pleased with the Altair clone and have turned it on but have otherwise put it aside until I can get to my Altairs.  There’s a couple of other projects I need to clean up first but I am looking forward to working 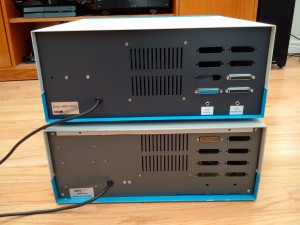 For comparison, the computer on top is the Altair clone.  The dimensions are almost identical with some minor differences but if they are not side-by-side, you’ll never know the difference.  My original MITS Altair 8800 is an earlier version with a slightly different face plate but the clone has the same faceplate graphics as the normal later Altair 8800.  It truly is the same user experience until you pick it up 🙂