As I go through the process of restoration for a second Olivetti Programma 101 I was able to acquire, I will post pictures of some of the things I have to deal with.

First off was receiving the package that included the Olivetti Programma 101 (P101).  It was shipped from the US and was declared as a “Calculator”.  Having an 87 pound (39 kg) box come through Canada Customs as a “calculator” triggered alarm bells because most people think of calculators today as one that can slip into a pocket.  This one doesn’t slip into a pocket 🙂  As such, it was flagged for inspection and thanks to the excellent packing done by the sender, it got here with only one slight issue. 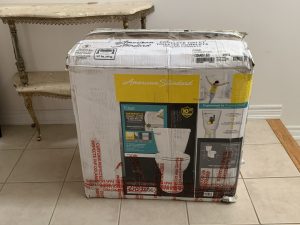 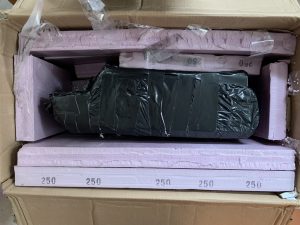 The interior of the package

I though it was quite comical when it arrived in a box that had previously held a toilet. This was a fine example of state-of-the-art technology for it’s time and a very beautiful design and it coming in a toilet box was rather ironic.  The internal packing was superb.  Because of the weight of the P101, stiff foam insulation sheets help prevent any damage.  Yes, it is firm but the P101 is a metal box, pretty much, and anything breakable was removed.

The P101 was also enclosed in a “cocoon” made up of garbage bags and tape. This helps keep everything together as it was tightly sealed so that if keypad keys fall off, for example, it is inside of the cocoon and easily retrieved.  In this case, Canada Customs opened it for inspection (and they thankfully opened it as minimally as possible) but one key had fallen off and it escaped the cocoon because of the gap.  Luckily I found it in the box.  The box did develop a hole in transit so I was very lucky.

The P101 as it was unpacked

Key caps were removed for cleaning. 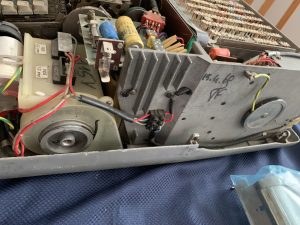 Side view of the internals 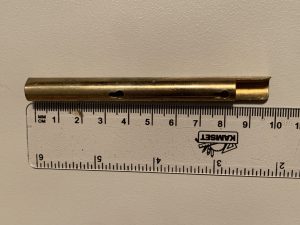 The P101 was unpacked and opened up.  I did find a couple of pieces that had come loose.  One spare piece had me puzzled.  I have another P101 that is non-functional but complete.  It did not have that piece. A quick check via the “Vintage Computer Club Italia” Facebook group resulted in a reply by Gastone Garziera, one of the original engineers.  He didn’t recognize it so it’s not a P101 part.  I’m not sure how that got inside so that will remain a mystery.

From the pictures above, the P101 was stored on a shelf and got dusty over the years.  This particular example appears to be from 1969.  It is also an Olivetti Underwood branded model.  From the side view, you can barely see what is left of the 3mm diameter round belt that is supposed to go from the front motor to the rear fan.  The key caps were removed for easier cleaning but more importantly, the area underneath the keypad needed to be cleaned up from dust stuck to old machine oil.  That area also needs to be re-lubricated.

Dust has gathered that needs to be cleaned up 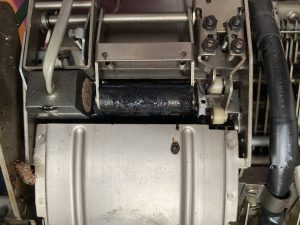 This is what a rubber roller looks like after 50 years.

Belts and rollers disintegrate over time

Area needs to be cleaned up.

One can see reference to the 115v transformer.

One can see the build-up of dust that sticks to old lubricated parts.  Rubber rollers turn into a tar like substance and jam up mechanics within the P101.  Reinforced rubber belts that once existed turn to rubber fragments.  Different material was used and some turns to tar while others disintegrate.  All needs to be cleaned up and refabricated because these parts no longer exist and the gears that have split are of a pitch that is no longer available. 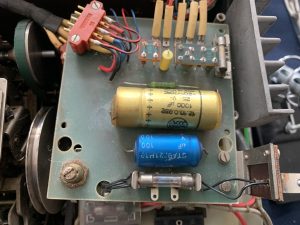 The yellow capacitor has leaked over time 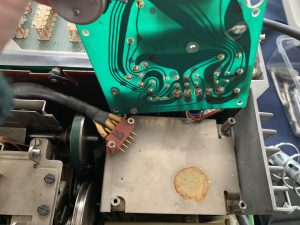 Capacitor has been replaced with a modern one.

While I go through this P101, I will be checking capacitors along the way.  The yellow capacitor as shown has leaked over time and is now replaced.  As I get deeper into the restoration, capacitors are checked with an ESR meter.  You don’t just “re-cap” these units.  In most cases, these capacitors are not easily replaced and they are still good to this day so there is no need for replacement.