I recently acquired an Intel 8008 based computer known as the “Bill-1” that was originally designed and developed at Litton Data Systems in the early to mid 70s.  It has this name because that’s the name on the extensive documentation that came with it housed in a Litton Data Systems binder.  It also happens to be 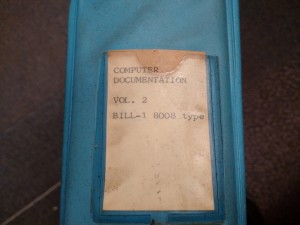 the first name of the person who, I believe, was part of the original design team and was the previous owner; William J. Stewart.

While the popular 8008-based computers of the time included the Mark-8 and Scelbi, the Bill-1 is not a variant.  These other systems are well documented in both their history and design and have a following of enthusiasts that have gone as far as recreating them in recent years.  This computer is is based on the MCS-8 architecture as indicated in the documentation but has no known history.  It is probably the case because it’s a prototype computer for military applications.

The documentation that came with it is extensive and includes schematics for each board,  wiring diagrams, circuit board layouts, board designs and parts lists complete with mil-spec part numbers.  Each board also includes extensive testing control documents.  All of this is in the binder marked “Volume 2”.  It is very clear that this was no “hobby computer”.

Unfortunately, “Volume 1” did not come with it.  This missing volume could have specified the nature of this computer and why it was built.    It is referred to as a “CCU” or “Communication Control Unit” in it’s expanded form and lists some military projects in the hardware “change requests”.

The computer itself is made up of mostly printed circuit boards that were later acquired personally by Mr. Stewart as surplus boards from Litton Data Systems.  Additional  prototyping boards were also acquired in the lot with some being utilized for the creation of an unfinished front panel.

The computer is made up of a number of boards including:

The chassis is made up of 80 position card connectors that sit on a Vector Electronics frame. 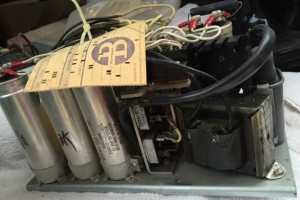 It will be an adventure to try to try to restore this computer into a running form.  Thankfully,  this should be possible with the extensive documentation that include sections for each of the individual boards.  I’m not sure there is enough specific information to make each board interact with each other.  There’s not RS-232 ports and the front panel is incomplete. 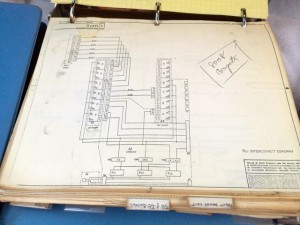 the EPROMs and store the dumps safely away before doing anything.    I am hoping that a disassembly will give me some clue as to it’s capabilities.  The parts are ordered and the assmebly of my reader/programmer will begin soon.

Additionally, I will study the documentation in detail and try to retrace it’s production.

Below are a few more pictures of the individual boards.

Below are even more photos of the entire construction from various views plus the work started on the front panel.