In December, 2021, I saw an auction for a “Vintage Portable Monitor Keyboard Cables/Cords and Carrying Case *Parts/Repair*”.  The pictures in the eBay auction were plentiful but the description was vague.  It was one of those auctions where you had to basically guess what it was because there were no markings on the keyboard or monitor to be found.   Below are pictures from the auction: 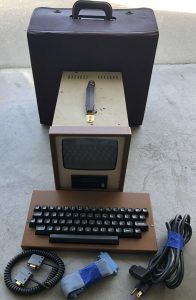 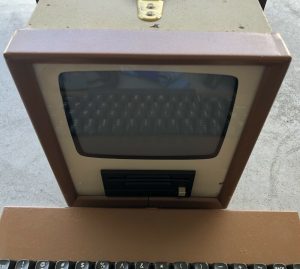 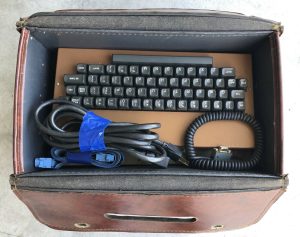 Packed in the travel back 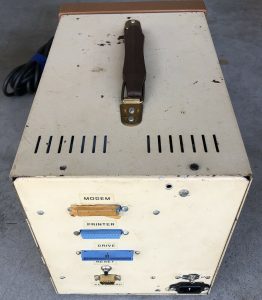 With the main auction photo, you don’t get too many details other than it has a monitor and keyboard and both look as if they are made of metal.  The front photo didn’t really help with determining the size unless you consider the normal size of a keyboard.  The black portion on the front appeared to be video controls perhaps behind a panel.  One can see from the picture from the top of the bag that it all fits neatly inside the bag but dimensions are still not easy to gauge unless you consider the keyboard size.  The rear picture, however provides all of the clues.

While this auction was advertised as a “keyboard and monitor”, there had to be more than that.  The rear interfaces were not of monitor outputs but of computer interfaces including a printer, disk drive and keyboard.  The reset button would also be peculiar for just a monitor.  The screws were also slotted which gives some idea of age.  That would put it at mid-70’s to early 80s.  Anything later would likely have had Phillips head screws.  I knew it had an internal power supply as the IEC connector for power was there, along with the on-off switch so I figured it was semi-complete. The power connector indicated it wasn’t too early or it might have had the oval power socket.  What I didn’t realize until it arrived is that it had an internal floppy drive. 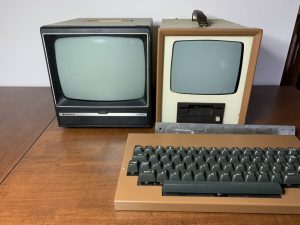 Once I received it, I took a picture next to a Sanyo 9″ monitor for size.  The screen on this computer was approximately 7″. Also on the front I could clearly see the 3.5″ floppy drive.  After some research, I found that this is Sony’s first single sided, single density (SSSD) 360k 3.5″ floppy drive model OA-D30V.  I didn’t know it had a floppy drive when I saw the auction so through my research I had found that the original first run Sony 3.5″ SSSD diskettes looked a little different than the ones most are used to seeing so I rechecked the original sellers auctions.  Lo and behold, the seller was selling a set of floppy diskettes and amongst them was one of the first Sony 3.5″ floppy disks.  The seller had no other floppy diskettes they were selling so these diskettes must be a match. 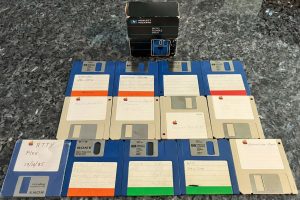 On the right is a picture of the floppy disk auction.  Notable floppy disk types are the first Sony 3.5″ SSSD diskette with the oval shaped access hole in the metal diskette guard. This guard does not have a spring so the disk guard needs to be manually slid open before inserting the diskette into the drive.  Also in this lot are some early HP 3.5″ SSSD floppy drives with an ovalish shape as well.  Those have a revolutionary “Auto Shutter” which I assume means it has a spring built into the diskette guard and was a feature built into all future 3.5″ floppy diskettes.  .Since the Apple Machintosh was one of the earliest computers with 3.5″ floppy disk drives, I assume the Apple branded diskettes were easier to come by in those early days of that particular drive mechanism.

There is some interesting software in that eBay lot of diskettes that indicate this computer runs the Flex 9 operating system. There is also the WordStar suite of software and Zork.  It will be a little bit before these diskettes will arrive so I will have to try them out later and report back.

Opening the unit up, I removed the back screws to remove the back panel.  I wasn’t sure where to start but once I had pulled it open, it turns out that it 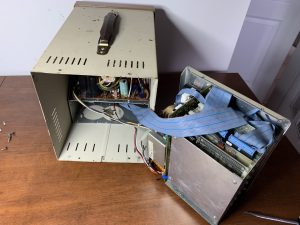 was the correct place to start. I was surprised to find a small card cage with power supply attached.  The main unit held the Sony floppy drive and CRT.

The card cage has a backplane with six slots but four of them are populated.  Because of the Flex 9 diskette, I was expecting to find a Motorola 6809 based system but as I removed the cards one-by-one, I could not find a 6809 CPU card.  Instead, I found a Zilog Z80A CPU card.  Below are pictures of the internal cards.  Included are pictures with captions to describe what they are.  Essentially, there is a RAM card that also has an unpopulated SASI area so this computer could support a hard drive if that part of the card was populated.  There is also a video card for the internal CRT, the Zilog Z80A CPU card with additional IO functionality for the printer and modem ports and finally the floppy controller card.

Picture of the card cage and various cards: 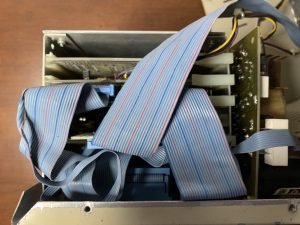 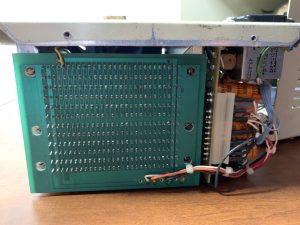 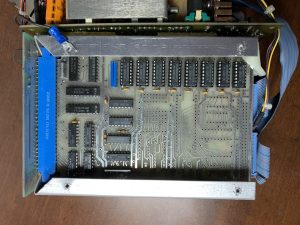 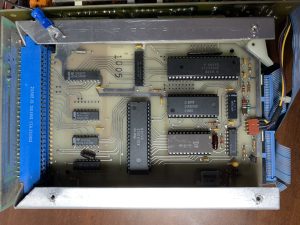 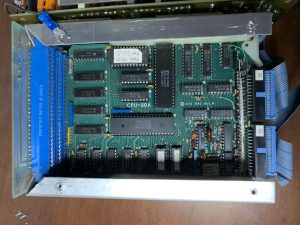 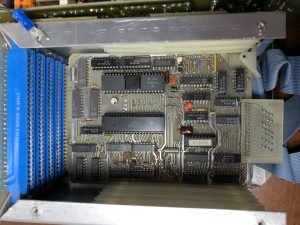 Since the CPU card had a boot EPROM, I read that to back it up and have determined that with the following text on the EPROM, it helps solve one thing and confuses me on another.  The text was:

So we now know the cards, at least, were made by XYZ Electronics, Inc but the CP/M boot reference confuses me because of the Flex 9 diskettes found.  Makes sense for the Z80 CPU but we’ll have to try out the diskettes when they come.  It also looks like the internal CRT needs some capacitor attention so I will not be powering this up just yet.  Since I am still waiting for the floppies from the separate auction to arrive anyway, there’s not much point in hurrying.