Commodore 900: The Unix-like workstation/server that was eclipsed by Amiga

Some time ago I acquired a Commodore 900 computer.  It was originally owned by one of the engineers who worked on the project but it needed some attention to get it to work. 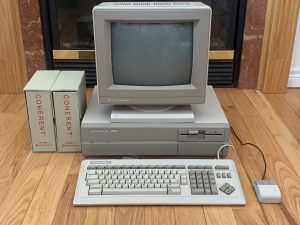 “S8000”, the “Z800” and the “M-Series Z8001” but it were a lot of references to “Z8000HR” because it was based on the Zilog Z8000 architecture and there was both a multi-user server option and a Hi-Resolution workstation option. The C900 (short for Commodore 900) ran an early version of Coherent 0.7.3 that was a Unix work-alike OS by the Mark Williams Company.  It ran a customized version for the C900.  The documentation I have for this computer is available at the following location: https://vintagecomputer.ca/files/Commodore/C900/  There you can find lots of internal documents and schematics along with the Coherent manuals.

The example C900 I have can be configured in two ways: 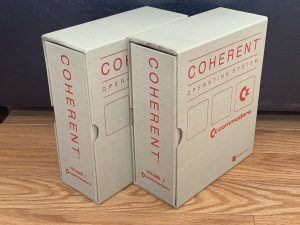 into the business side one the upcoming networking was to be put into place.  Unfortunately, it didn’t make it that far.

Commodore was in the process of acquiring Amiga and focus was turned away from the C900 and the potential that was there.  It was a departure from what Commodore was known for and was already a market leader in the home computer segment.  It was a little more familiar than the education and research markets that Commodore had a small role in with the PET.  But that was a dwindling market for them.

The C900 could have been a competitive product along side Sun and HP workstations in 1985 but the direction changed and the C900 project was cancelled.  Some say it never worked properly but I was able to get my C900 up and running. 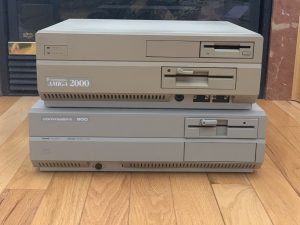 Often compared to the design of the Amiga 2000, the C900 was designed earlier and the styling were used on the Amiga 2000.  There are some differences in dimension even though some believe it is the same case.  You can see the difference in this image.

I still have some more exploring to do as I was able to get the C900 running for the first time on October 15, 2020.  Two power supplies later and some careful massaging of the 20MB Miniscribe 3425 hard drive that was stuck brought life back to this computer. My initial exploration was of the early version of Coherent.  I have experience with Unix but I do find it odd that all of the networking utilities are missing (they were not available yet). It would certainly make archiving attempts easier but I will have to rely on the custom quad-density 1.2MB floppy drive and likely the serial port that can do 19,200 bps at best.

During my initial exploration, I was able to find a Commodore 900 demo that was likely used in the Hannover Fair in Germany in 1985.  This video shows it running on my C900.  Further work is ongoing in trying to archive the hard drive contents and finding a more permanent workable hard drive solution.